Our lab has been focusing on biosynthesis and functions of microbial cell wall glycoproteins and polysaccharides for over 30 years. Our research interests include investigation of synthesis of the surface polysaccharides and glycoproteins in fungal and bacterial pathogens, their functions during infection, and identification of new targets for diagnosis and therapies. We also interested in the post-translation modification of proteins in fungi and construction of expression system for glycoproteins. The major advances achieved in the structures, biosythetic pathways and functions of cell wall of fungal pathogens (Aspergillus fumigatus and Fusarium oxysporum), extracellular polysaccharides of bacterial pathogens (E. coli, Streptococcus suis, and Strptococcus pneumonae), and archaea (Haloarcula hispanica) are briefly summarized as the following.

1. Biosythesis of fungal cell wall and its function during infection

The cell wall is a unique structure of fungal cells, which is not only a physical barrier to proctect fungal cells in environment, but also a cellular structure to directly contact host cells. As cell wall does not exist in mammalians, it has been long taken as an ideal target for development of anti-fungal drugs and diagnosis as well.

1.1 Biosynthesis of cell wall and its function in infection caused by A. fumigatus

A. fumigatus is a major fungal pathogen causing invasive aspergillosis (IA). The mortality of IA is around 85%. The mortality still remains high at ~50% even treated with currently available drugs. The higher mortality is due to late diagnosis and limited drugs. There is an urgent need to develop new theurapies. To encourage the drug development, the U.S. Food and Drug Administration's (FDA's) issued the Generating Antibiotics Incentives Now (GAIN) Act to grants new antifungals “orphan status”, lower clinical trial barriers, and allow a 5-year extension of market exclusivity for anti-fungal drugs.

We have determined the structures of N- and O-glycans on glycoproteins produced by A. fumigatus. Through bio-informatical and proteomic analyses, the glycosylation pathways (N-glycosylation, O-glycosylation and GPI-anchoring) have been identified. Based on this information, the synthesis and functions of the presursors of cell wall glycoproteins and polysaccharides were investigated by genetical and biochemical methods. Our results show that pmi1, srb1, uap1, and ugm1 genes, which are responsible for activation of mannose (Man) and N-acetylglucosamine (GlcNAc) to produce GDP-Man and UDP-GlcNAc respectively, are essential for the synthesis of cell wall glycoproteins and polysaccharides. Deletion each of these genes causes phenotypes such as cell wall defect, cell death, abnormal morphogenesis, and porlar abnormality, suggesting that these genes are potential targets for anti-fungal drugs. The stt3, cwh41, msdS, and ams1 genes, which are invovlved in N-glycosylation and de-N-glycosylation, were found to be required for cell wall synthesis and polarized growth. The mechanisms have been elucidated. Investigation of the pmt1, pmt2 and pmt4 genes has shown that O-glycosylation is required for cell wall synthesis, thermotolerance, and polarity. Deletion each of these genes leads to different phenotypes, which has been confirmed due to different substrate specificities of each Pmt.

Recently, we have confirmed that Gel1, Gel2, Gel4, and Ecm33 are GPI-anchored membrane proteins. Glucanosyltransferases Gel1 and Gel2 require N-glycosylation for their proper folding. Mp1 has been confirmed as a specific GPI-anchored cell wall glycoprotein. Mnn9 is involved in the cross-link of Mp1 to cell wall glucan. Further study shows that maturation, sorting and localization of Mp1 are modulated by GPI-glycan modification. Interferring the modification of GPI-glycan leads to mis-localization of Mp1, cell wall defect, abnormal polarity, autophage, increased adherence, and stronger immune response in mouse model and innate immune cells. Our results demonstrate that GPI anchoring is essential for sorting and localization of cell wall proteins, which then affects the structure of cell wall, virulence and immune response of A. fumigatus (Figure 1). 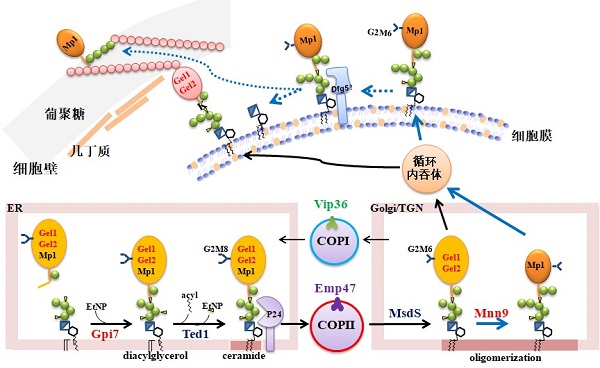 Figure 1. Model of the cell wall synthesis in A. fumigatus. In A. fumigatus, glucanosyltransferases Gel1 and Gel2, and cell wall glycoprotein Mp1 are GPI-anchored proteins. (1) N-glycosylation is required for proper folding of Gel1 and Gel2. Properly folded Gel1 and Gel2 will be modified by GPI and transported to plasmic membrane to synthesize cell wall glucans. (2) During synthesis of GPI anchor, the last step involves in the modification of Man2 residue in GPI-glycan with phosphoethanolamine (EtNP) by Gpi7. Upon modification of Man2 residue with EtNP, GPI anchor becomes mature form and transferred to protein. Then GPI-anchored proteins will undergo a release of EtNP group on Man2 residue by Ted1, which allows the specific recognition of GPI-anchored proteins by p24 and the recuitment of GPI-abchored proteins into COP II vesicle. Once the modification of Man2 residue was inerferred, Mp1 is unable to cross-link to cell wall glucans. (3) After GPI-anchored proteins are transported into Golgi via COP II vesicle, glucanosyltransferases Gel1 and Gel2 are specifically expressed on plasmic membrane as the first or second residue at the C-terminal of protein is alkalic amino acid. (4) The cell wall glycoprotein Mp1 will be further processed by Mnn9, which initiates the elongation of O-linked glycan to form mannan. After release from plasmic membrane, Mp1 enters cell wall and cross-links to glucans. (5) In ER, lectin Emp47 is responsible for the sorting of N-glycosylated secreted proteins into COP II vesicle, which ensures proper transport of secreted glycoproteins into Golgi. (6) In Golgi, lectin Vip36 is responsible for the sorting of chaperons leaked from ER into COP I vesicle, which ensures protein retrieval from Golgi to ER and maintains ER-hemeostasis.

1.2 Contribution of cell wall glycoproteins and polysaccharides to virulence of Fusarium oxysporum

Fusarium oxysporum is a fungal pathogen causing wilts of various agriculural plants. Our research has identified that Pmt1, Pmt2 and Pmt4 are responsible for O-glycosylation in F. oxysporum. Although their functions are different, all of them contribute to virulence. The ugmA, ugmB and gfsA genes are responsible for synthesis of galactofuranose-containing sugar chains in cell wall and essential for virulence of F. oxysporum. As galactofuranose-containing sugar chain is not found in plant, the pmts, ugmA, ugmB and gfsA genes are ideal targets for anti-wilts.

2. Biosynthesis and function of extracelluar polysaccharides of bacterial pathogens

It has been known that extracellular polysaccharides are involved in virulence, immune response, and drug resistance of pathogenic bacteria. Escherichia coli K1 and Streptococcus suis are baterial pathogens causing bacteremia and meningitis in human neonat. Previously, we found that NeuA, the key enzyme responsible for the synthesis of capsular polysaccharides in E. coli K1 and S. suis, is a bi-funtional enzyme, which possesses both CMP-NeuAc sythetase and O-acetylhydrolase activities. Further investigations reveal that NeuA is a part of the regulatory mechanism to modulate the O-acetylation degree of capsule. Although the detailed mechanism remains unclear, it has been demonstrated that O-acetylation of capsule is a strategy for bacterial cells to adapt host environment. High O-acetylation of capsule enables bacteria escape from Siglect-mediated innate immunity. The knowledge obtained from our research will provide new strategy and targets for anti-meninggitis theurapies.

In addition, we have also investigated the synthetic pathway of extacellular polysaccharides in S. pneumonae. Several genes have been identified as determinators of different serotypes.

3. Expression of glycoproteins in fungi

In attempt to obtain an expression system for humanized glycoproteins, more recently we are also working on re-construction of glycosylation pathways in Pichia yeast.

Figure 2. Schematic depiction of the N- and O-glycosylation pathways in Haloarcula hispanica. The S-layer glycoproteins of H. hispancia are modified by an N-linked Glcα-(1, 2)-[QuiNSβ-(1, 6)-]Gal trisaccharide and an O-linked Glcα-(1, 4)-Gal disaccharide. N- and O-glycosylation of the S-layer glycoproteins occur on the outer surface of the cell membrane, using DolP-linked sugars as donors. Glc-DolP and Gal-DolP are first synthesized on the cytosolic side of the cell membrane, likely using UDP-Glc and UDP-Gal as donors, respectively, via the actions of unknown glycosyltransferases. Then, Glc-DolP and Gal-DolP are flipped to the outer surface of the cell membrane in a reaction thought to involve Agl23 for subsequent use in N- and O-glycosylation. Although both N- and O-linked glycans contain Glc-Gal disaccharide part, distinct glycosidic linkages indicate different routes of their biosynthesis. The N-linked glycan is first assembled as Glcα-(1, 2)-Gal-DolP by Agl22 and transferred to N-glycosylation sites in target proteins, presumably by the oligosaccharyltransferase AglB. The third sugar, QuiNS, is then added to N-linked disaccharide by an unknown glycosyltransferase using QuiNS-DolP as a donor. The O-linked Glcα-(1, 4)-Gal disaacharide is sequentially added to O-glycosylation sites by unknown glycosyltransferases using Gal-DolP and Glc-DolP as donors.